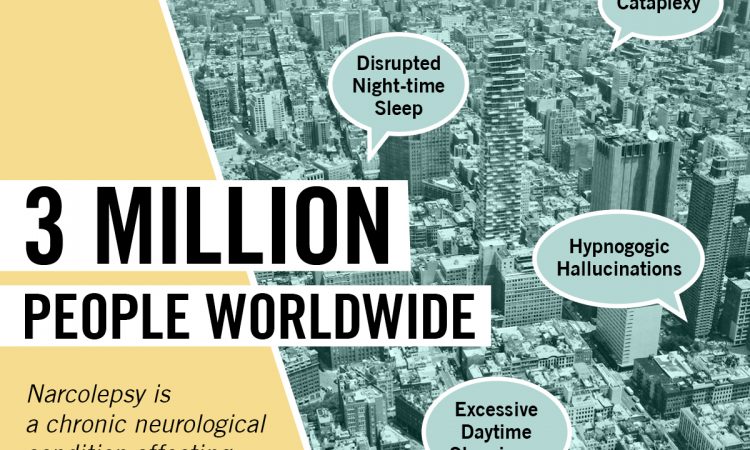 Narcolepsy is a neurological sleep disorder characterized by chronic, excessive attacks of drowsiness during the day, sometimes called excessive daytime sleepiness (EDS).Attacks of drowsiness may persist for only a few seconds or several minutes. These episodes vary in frequency from a few incidents to several during a single day. Nighttime (nocturnal) sleep patterns may also be disrupted.

Three additional symptoms often associated with narcolepsy are: sudden extreme muscle weakness (cataplexy), a specific type of hallucination that occurs just before falling asleep or upon awakening, and brief episodes of paralysis while waking up.

Narcolepsy also may be associated with “automatic behavior”, i.e. doing something automatically without any memory afterward.

The incidence of narcolepsy is approximately 1 in 2,000 and most researchers believe that the disorder remains undiagnosed or misdiagnosed in many affected individuals.

In narcolepsy, the immune system destroys certain brain cells that produce a peptide called hypocretin. Hypocretin impacts on many brain functions, but the details of its actions are not yet understood. Why the immune system attacks healthy cells in narcolepsy is unknown and additional environmental and genetic factors may play a role in the development of the disorder.

The development and severity of symptoms associated with narcolepsy vary greatly from one person to another. The onset of symptoms initially occurs one at a time; appearance of new symptoms may be separated by years, with sleepiness generally preceding cataplexy. Narcolepsy usually begins in an adolescent whose initial symptoms are mild but worsen with age. Sometimes symptoms do not change for months, while at other times symptoms may change very quickly. Depending upon the severity of the disorder, narcolepsy can dramatically affect a person’s daily routine, disrupting all aspects of a person’s life.