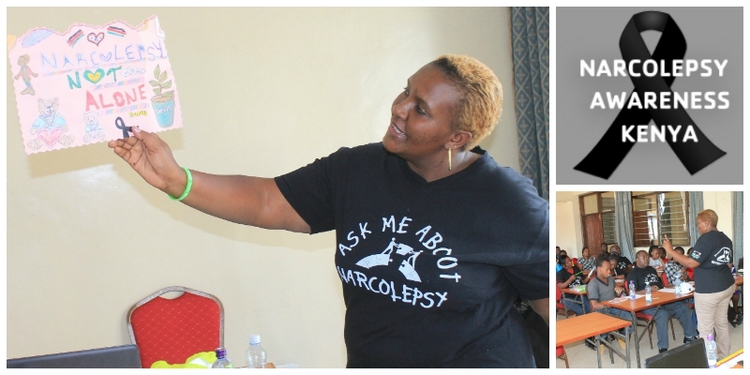 My name is Anne Nduati. I am a business lady living in Nakuru County. I am a single mother to a 13-year-old girl called Jane Wachera.

My business activities include events management, marketing and product branding. I can brand vehicles, buildings, and promotional items. I live a very active life which calls for alertness in everything that I undertake, because mistakes are costly.
One situation that has taught me to be extremely keen, alert and patient with situations is my daughter, Wachera.

She was born a normal child, and my parents really dote on her. There was nothing unusual about her behaviour, or demeanor as she grew up.

For a long time, I assumed that she is playing games on me when she would suddenly fall asleep and even start snoring, even in the middle of an activity.

I even thought she was bewitched because she would sleep too much during the day, especially in school. The teachers would summon me countless times and ask me questions that I could not answer. When the trend became extreme, I thought of seeking professional help. I took her to a doctor who after examining her, diagnosed her with a sleep disorder called narcolepsy.

Now, the stress burden was not just on me. The little girl had experienced enough humiliation to the point of contemplating suicide. She felt that nobody understood her, especially her age-mates and teachers in school. This led to her getting stigmatised despite being the top performer in the class.

In school, Wachera sleeps through the afternoon lessons, despite her own efforts to stay awake. Her teachers would muse how despite her sleepiness she would emerge top of the class.

She would suddenly snore off even in the middle of a science experiment, leaving her peers amused how she could pull such stunts.

They did not know that she has no control over what would grasp her attention, and preferred to call her names instead. For a girl with impressive performance in class, dozing off in the middle of a lesson looked more like a joke.

Wachera could not take the taunting. She started to get agitated, and even talked of suicide on several occasions.

“Mum, why me? Why does such a strange thing have to be on me? Why didn’t God choose someone else to be like this?” she would ask me over and over. Well, those are questions that have no answers for at all, but as you know, children do not believe in answers such as “I don’t know”. I had to look for answers, and quickly.

I went back to the doctor and told him to come up with a solution. The medications would work but not without their own problems. We needed a solution that would stay longer.

The doctor recommended that she has to go through professional counselling to help her understand her situation, and accept to live a full life despite the problem.

I went with her on some of the sessions where a counsellor explained to her what she is suffering from, and that it is not her fault.

She had thousands of questions, such as how God decides who should suffer. At some points, she plainly doubted how a good God would cause suffering on innocent children.

Well, the outcome of the therapy is something to smile about. It worked for her. She eventually accepted her situation, and does not blame anyone any more.

I can vouch for counselling to help people cope with life. Always talk to someone when you are going through a difficult situation, because I realised that there is help out there, if we are willing to get out and look for it.

Indeed, Wachera took her therapy so positively that she suggested if we could start a campaign to raise awareness about this disorder.

As a mother who has experienced the depths of despair out of this problem, I admired her spirit. I then started to reach out to friends and other persons who showed interest in supporting us.

To date we have identified a number of people with same condition and this has motivated us to start the Narcolepsy Awareness in Kenya, an organisation that helps to identify the affected in the society.

My daughter sacrifices her free time to create awareness through her art. She also encourages me that despite her sleep disorder, she will one day become a neurologist.

Narcolepsy cannot be cured, but it can be managed. Medications used to manage the disability are stimulants such as Ritalin which my daughter used for few months but resulted in many side effects, thus making us discontinue its use.

As a parent I advise that if you have a child with a condition that you do not understand, please develop an interest to know more so that you can support your child and never be ashamed of the situation. If I had ignored, I would have lost my precious daughter.